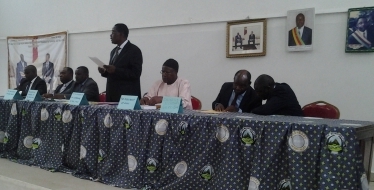 (Left to right: the Lord Mayor of Buea, the Divisional Officer for Buea, the General Inspector for Services, the Secretary General at the Office of the Governor, the Representative of the Chair of the National Anti-Corruption of Cameroon, the Executive Secretary of the National Anti-Corruption Strategy and the Country Director FITCAM)
Balancing actions to expose corruption with non-confrontation is not always easy in Cameroon where the challenge of corruption is high and visible to ordinary citizens on a daily basis. Again, the governance system in Cameroon provides senior civil servants with enormous authority to oversee the provision of services at sub-national levels and also execute huge local government budgets assigned for public service. 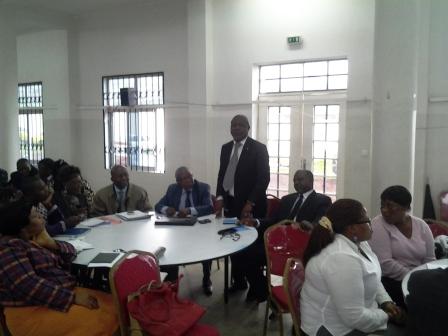 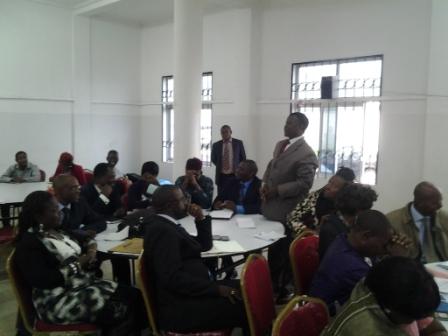 The Regional Delegate for Tax Control comments on his department.
Accountability on resource expenditures in the public service is not often communicated to the local public or ordinary citizens for whom the resources where allocated. 90% of all accountability decisions and actions are conducted through reports that are channeled to the central government ministry by the head of regional ministerial department concerned such as Governors, Regional Inspectors, Regional and Divisional Delegates, local government council authorities such as mayors and heads of regional regulatory agencies.
Creating open government at sub-national level in Cameroon where junior public servants and citizens participate in monitoring service delivery and score their superiors against, transparency, accountability and the fight against corruption within the 10 regional public service departments in the South West Region has triggered a new drive and impetus in the implementation of the Regional Anti-Corruption Plan of Action for the South West Region put in place in 2014 in a problem identification workshop organized jointly by FITCAM and the National Anti-Corruption Commission of Cameroon. Participants include all Lord Mayors, Regional Delegates of government ministerial departments, religious institutions as well as forces of law and order.
Collaborating with heads of government public service institutions to identify public service areas in their various ministries prone to inefficiency and other corrupt practices led to the development of a Regional Anti-Corruption Plan of Action for the South West Region comprising of 5 strategic axis areas for joint action: 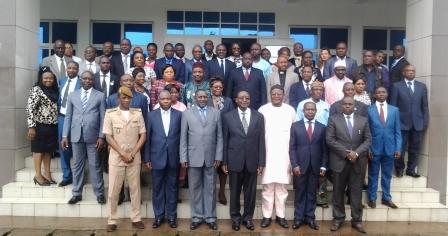 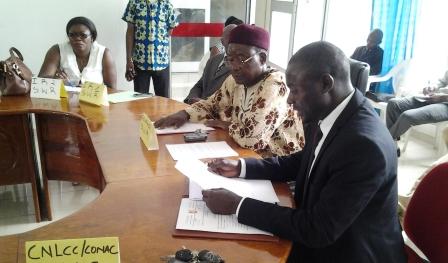 Stephen N. Asek
This efforts has led to the non-confrontational inclusion and collaboration of many front line public service providers and heads of public institutions to join the crusade against corruption in an effort to distinguish their services from others in terms of realization and implementation of the regional anti-corruption plan of action which is evaluated annually by a joint team of the National Anti-Corruption Commission, FITCAM, the Regional Governor, Traditional rulers, Mayors, Regional delegates and business and community leaders. This program of collaborative actions in identification of corrupt practices and follow up with government officials for improvement is creating activists of public officials who are at the front line of public service provision in the South West Region. To learn from the lessons of the workshops and for CSOs to abreast themselves with the operational plan of action for the fight against corruption in the South West Region involving all government actions,
FITCAM is please to invite CSOs to the 2015 Evaluation meeting on the Implementation of the Regional Anti-Corruption Plan of Action for the South West Region. Participants include all Lord Mayors, Regional Delegates of government regional ministries, community leaders, traditional rulers, private and public sector business operators, religious leaders, the National Anti-Corruption Commission and the Governor of the South West Region. The workshop will run from June 1st- 4th June, 2015 at the Buea Council Hall in Buea from 9:00am-3:pm. Please see attachment for a copy of the 2015 regional anti-corruption plan for which heads of regional services and ministerial departments will be evaluated against. Visit FITCAM